The space coordinate system that we choose is somewhat arbitrary, perhaps we may choose orthogonal (mutually perpendicular) x,y and z coordinates that align with the surface of the earth where we happen to be, or we could choose any other convenient alignment. In the same way the origin point of the coordinate system is similarly arbitrary.

This can be useful as changing the frame of reference (different observers) in an appropriate way could simplify the mathematics.

When we go on to look at dynamics we shall see that the laws of motion are independent of certain changes in the coordinate system such as:

We can think of these as symmetries.

This means that if we do a mechanics experiment where the frame of reference is transformed in any of these ways then we will get the same result (provided that we are consistent: if we are using some equation then all the quantities in that equation must be measured in the same coordinate system). in fact this can be stated in a stronger way: there is no way, by doing physics experiments that we can determine an absolute time, space or velocity, these things always have to be measured relative to something. This relativity principle applies both to Newtonian and Einsteinian physics although, as we will see below, the nature of the velocity transform depends on which of these we are using.

There may be other symmetries, for instance, reflection in space or time, however there are some frames of reference which will alter the laws of physics, for example, where the frame of reference is accelerating or in a constant angular velocity.

We will now look at these changes or transforms individually in more detail.

We can change the frame of reference by shifting the timeframe as follows:

Another way to express this is to represent space-time as a 4 dimensional vector in which case, for newtonian physics, we get:

We can change the frame of reference by shifting the origin as follows:

Another way to express this is to represent space-time as a 4 dimensional vector in which case, for newtonian physics, we get:

In the same way we can rotate the space frame as follows:

or if we have components of velocity in all dimensions the transform will be:

in other words point:

The nature of this transform is a shear (also known as skew) transform:

When doing this we choose to make time 'absolute' in that the time lines are left horizontal wheras the position lines are skewed althogh I guess that this is just a covention and we could have skewed the time and made the distance absolute.

At first, it may seem a bit academic to transform these quantities into different frames-of-reference but, this is important for solving practical problems like collisions. For instance, the two objects colliding will have their inertial tensors defined in their own local coordinates, but when we work out the collision response, the impulse will have to be calculated in some common coordinate system.

It may be that the transform is changing with time, for example, if we are trying to solve a collision response, we might want to work in the frame-of-reference of one of the objects that is colliding. This object may be moving, so its frame-of-reference is moving with respect to the absolute coordinate system.

To take an example, imagine a solid object travailing in free space, it may be spinning and have linear velocity as well. We may want to work in this objects own coordinate system, because this frame-of-reference is rotating, the Newtonian laws may not apply, for example an object which is stationary in the absolute frame-of-reference will appear to be traveling in a spiral in this objects frame of reference. An object with no forces acting on it should not be moving in a spiral, so Newtonian laws do not apply in this frame-of-reference. However, if we want to apply this inertia tensor, then we have to work in the local coordinate system of the rotating object.

Using matrix algebra to calculate transforms to other frames-of-reference

As described here, a 4x4 matrix can be used to represent a rotation and a translation in 3 dimensions. So we can use matrix algebra to translate from one frame of reference to another.

It turns out that transforms can be concatenated by multiplying their corresponding matrices. So [Tms] = [Tes]*[Tme].

So the relative position is given by:

For Solid objects, we need to specify both the location and the orientation of the object to define its position. It might be useful if we could represent the transform of both location and orientation in one equation. To do this we need a 6x6 matrix as the position has 6 degrees of freedom.

However I am sure it would work for velocities because infinitesimally small rotations can be combined in the usual way.

However, multiplication of a 6d vector by a 6x6 matrix, might be a lot easier than multiPlying 4x4 matrix by a 4x4 matrix (which we would have to do several times if we are going to represent rotations by using matrices).

The advantage of this notation is that:

l . This can be thought of as the same point just measured in a different coordinate reference. A solid object can be transformed in this way by seperately transforming each point that makes it up.

This transform [T] is a 4x4 matrix and is capable of representing lots of tranforms such as sheer, scaleing, reflection, etc. which are not valid operations for a solid body, also it is very wasteful using a 4x4 matrix. Since we only want to represent translations and rotations, it may be more efficient to represent it in terms of a 3x3 rotation matrix [R] and a translation

But we still have the problem that [R] could be used to repesent invalid operations for a solid object, we need to ensure that [R] is orthogonal. The problem is that if a calculation involves lots of transforms then rounding errors could distort [R], therefore we need to normalise (or should that be orthogonalise) after tranforms are combined.

We have particle or solid object which has an angular velocity wl about point pl when measured in local coordinates. What will be its angular velocity when these quantities are measured in absolute coodinates? In the most general case the transform itself may be changing itself, it may be representing a rotating frame-of-reference about a different point than the centre of the local rotation.

So when we are working in absolute coordinates:

and when we are working in local coordinates:

So, substituting this in the above equations:

If the frame of reference is rotating about

a then the angular velocities can be added:

So although the frame-of-reference is moving about a different centre than the point is rotating, the absolute rotation is still the sum of the roations of the f-of-r and the local rotation. The actual motion may follow a much more complex path. See the following examples:

Thank you to the following for helping me with this:

It is shown here that, for a solid object, that curl(

Can anyone help me? 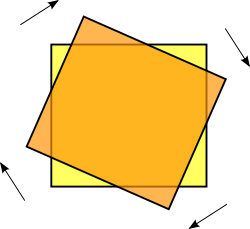 We can take some of the ideas of relativity and use them to study classical Newtonian physics. For instance we can investigate the transform between different frames of reference which are moving relative to each other at a constant velocity.

The Galilean transform can be represented by a shear matrix, the Lorentz transform is a hyperbolic rotation. 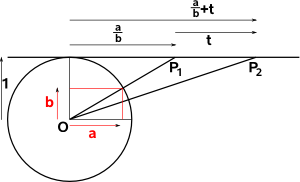