I don't think it’s possible to model a collision with 100% accuracy. The level of accuracy will depend on factors such as:

There is no right answer to these questions, it depends on factors like: what we want to do, what accuracy do we need, how much computer power do we have, how stable must the simulation be and what type of materials are we dealing with.

I have been discussing these issues with Rahil Baber by email, who has written a program to simulate solid body collisions without friction and has reviewed other work on the subject.

First he has written a very useful survey of the subject which he has kindly allowed me to make available here: RigidBodySimulation.pdf. This document gives a very good introduction to the subject, includes the formulas for solid body collision response without friction, and outlines problems in writing a robust simulator. (Disclaimer: no claims are made about the accuracy of this document).

To help readers get a flavour of the types of issues they should be aware of, and some of the work being done in this area, I have summarised below some of the things that Rahil discussed in our emails.

In 2D a body’s rotational behaviour is encapsulated by the moment of inertia which is a single constant scalar quantity. In 3D the moment of inertia is replaced by the inertia tensor which is a 3x3 matrix. What’s worse is that it does not remain constant; it changes as the objects orientation changes. Due to this, even under no external forces, the motion is very different in 3D. You may want to look at that part of the survey to see the formulae you have to integrate to calculate a body’s motion in 3D. He said his initial simulations looked completely wrong and he couldn't work out why. It turned out that he had given the inertia tensor silly values (even though they appeared reasonable) and suggested that it may be worthwhile writing an algorithm to automatically calculate the inertia tensor of a given object assuming its mass is uniformly distributed.

Possibly the worst problem you’ll face is sinking and jittering of objects which are meant to be at rest on a surface. For instance a box resting on the floor under gravity, or for a tabletop example how about a billiard ball pushed against a cushion due to a continuous strong breeze. The problem arises because when you drop a ball it collides with the ground and rebounds then collides again and again and again... Each time it loses some energy and the maximum height it reaches after each collision decreases geometrically. In fact it makes infinite collisions because the height never reaches 0 just becomes 1/2 lets say of its previous height. Because the height decreases geometrically so does the time between collisions, say it takes 1/2 the time between each collision, then the time it takes to come to rest is 1 + 1/2 + 1/4 + 1/8 + 1/16 + .... = 2. Consequently the amount of time it takes to make those infinite collisions and come to rest is finite! This is a major problem for computers, as they cannot simulate infinite collisions in a finite time (for something as simple as a ball maybe they could because we analytically know the right answer, in general though we don't). Hence computers make approximations and the force it applies is either too weak and the object sinks into the ground or it is too large and the object vibrates on the surface of the ground. There are various workarounds but they just push the problem elsewhere, there's no real way to get rid of it entirely.

Imagine a box resting on a table. The velocity of approach is 0, so no impulse is applied, and the box will intersect with the table, in the next time step. This leads to the box sinking through the table. You could argue well its ok because, in the time step after that, it will have some downward velocity, so an impulse will be applied, and the object will be given an upward velocity, which causes it to move out of the table. However what if e=0, then no impulse would be provided (or more accurately the impulse would have 0 magnitude), and the box would continue on its merry way through the table. This is perhaps a pathological example but it highlights the fact that you need to do something different when the contact is a “resting contact” i.e. when the approach velocity is 0 but the approach acceleration is positive. There are two popular methods of resolving resting contacts: the analytic force approach where you work out forces and numerically integrate them through time (see Baraff’s papers for more information), and the impulse approach where you replace forces by high frequency impulses (see Mirtich's thesis for more information).

Striking a body which is in contact with a third body is a problem. There are two ways this could happen see p30 of my document both are correct which is another limitation of the rigidity condition.

As an example of the issues: the above diagram shows the difference between the simultaneous and propagation model. In both cases energy is conserved, in each collision (e=1), but the outcome is very different depending on the assumptions made when colliding with bodies that are already in contact.

Brian Mirtich’s thesis highlights a problem with the jittering effect, and slopes, when you include friction. He notes that if a box is resting on a slope it won't slip if friction is high enough. However since simulations tend to have objects vibrating (usually at high frequency and amplitude less than a pixel in magnitude) that the box will momentarily be out of contact with the surface at various points and so the frictional force will vanish to 0 at those points. This results in the box slipping down the slope, which does not match what we’d expect to see. He also highlights a paper written by W. J. Stronge which shows that it is not valid to use Newton’s law of restitution when we do collisions with friction, as doing so may increase the energy of the system. This makes collisions with friction significantly more complicated.

The other person whose work seems to have been quite influential is Brian Mirtich (thesis here). His thesis is quite comprehensive on the area of rigid body simulation (with friction). He has a different approach to Baraff. Baraff tries to analytically work out the normal forces that occur whereas Mirtich tries to handle the normal forces as a lot of high frequency impulses.

Rahil has also sent me his code for 2D collision with friction here. This code is written in C and uses OpenGL. 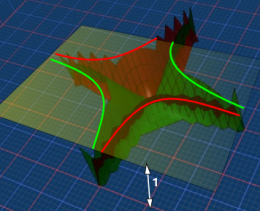 On These pages we look at how we might use these ideas to build a snooker game.