In the linear only case:

so the velocity change is J/m in the same direction as the impulse.

If the impulse is not in line with the centre of mass then there will be a change to both the linear and rotational velocity of the object. The aim is to derive an equation for the total change in velocity of a particle on a solid body due to an impulse on that point.

As described in the kinematics section the velocity of a point on a solid body is given by:

We can write this equation in terms of changes to velocities:

This consists of a linear component and a rotational component.

For the linear component, as explained above,

For the rotational component, since

as defined here, then integrating both sides over the time of collision gives:

This makes the equations very complicated, so to simplify things we will start by using a single scalar value for I, this will only be valid for symmetrical objects but we can use this simple case for now, this gives:

Substituting these impulse expressions into the expression for the particle velocity gives:

For the 2D case

We want to get an expression for J so we can start by grouping together the Jx and the Jy terms:

Solving this for J gives:

For the 3D case

Again we want to solve for J, One option is to use the triple product identity which gives:

As required J produces a greater velocity change if there is both linear and rotational motion. (thanks to databeaver for helping me out here)

In both the above special cases

Vp will be in line with the impulse J, but for cases in-between there will be a component in the direction of r, this means that an impulse in one direction can cause a change in velocity in a different direction (even when the object is symmetrical).

I would still like to get a more general solution for 3x3 inertia tensor,

We can convert the vector cross product to a skew matrix as shown here.

Kinetic Energy is a scalar quantity for any system (as described here).

For purely linear motion the kinetic energy of a solid body is:

For purely rotational motion the kinetic energy, about its centre of mass, of a solid body is:

So if we have combined linear and rotational motion can we just add the kinetic energy due to these parts separately? I think the answer is no because the energy of a particle is proportional to the square of its velocity. We need to add on another factor:

This can be derived as follows:

but the velocty of a particle on a solid body is (v + w x r) so the kinetic energy is:

this can be expanded out to give:

Imagine a theoretical solid object made up of two masses as follows:

Immediately after the collision the change in linear velocity of the top object will be:

and the bottom object will be 0.

So the linear velocity of the centre of mass (cm) will be:

The angular velocity in radians can be calculated from this by using v = w × r , so w will be: (linear velocity of cm) / r

Strictly we cant divide by a vector so we should really write this as:

It may seem strange that if the impulse is applied at the top then it will produce the same linear velocity as when applied at the centre but with additional rotational velocity. At first thought this may seem to contradict the conservation of energy, but conservation of energy is a completely different issue, for instance if the collision occurs at the outside of the object, there will be less to push against, so the impulse will be less.

So far this is a special case which is made up of two masses, in order to make this more general we want to work in terms of the moment of inertia (or if we are working in 3D the inertia tensor), this is:

I-1= inverse moment of inertia function 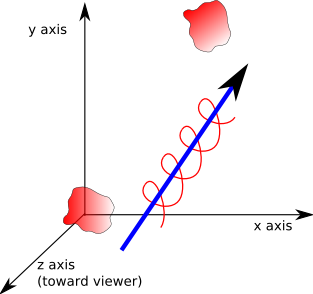