We could divide an object into a finite number of parts, in 3 dimensions, possibly a 4th dimension for time, and against this calculate some physical properties? forces, etc.

In this way, the calculations can be simplified, even if there are more of them. The shape can be made up of cubes, each cube is the same size and mass.

If we consider a non-deformable case, then the velocities and rotations will be the same for each cube. But how do we calculate this velocity? I guess we need to calculate the forces on each cube to do this:

Each cube in the shape will experience different forces and torques. There will be forces due to fields (gravity, magnetic, etc.) and there will be forces and torques transmitted between the cubes through their faces. This is where the number crunching is needed, but at least dividing the shape into cubes simplifies the analysis. We need to work out the forces on each cube, the cubes on the outside are simpler as there cant be any force on an outside face (excluding air/fluid pressure, or fields) so a technique might be to compute the forces starting from the outside and working in.

This method might simplify collision detection? by holding the position of each cube, then if 2 or more cubes occupy the same position, then there is a collision.

A collision will introduce a force between the colliding objects at the point of impact for an infinitesimally short time (impulse force) so this can be modeled using the same mechanism as other forces.

It seems quite difficult to model an object subject to bending forces. Is it realistic to expect to be able to model bending in this way, This could be a good test of this model.

A directed area has both quantity and direction. The quantity represents an area and the direction represents the plane that the area is in. 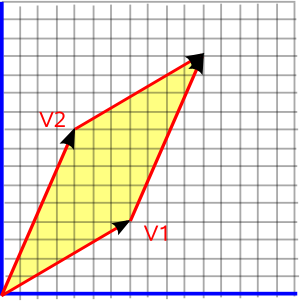 This quantity is similar to a vector, but has slightly different properties and is called a bivector.

A discussion of directed areas using vectors is on this page.

A discussion of directed areas using clifford algebras is on this page.

Planes, surfaces and areas are discussed on this page.